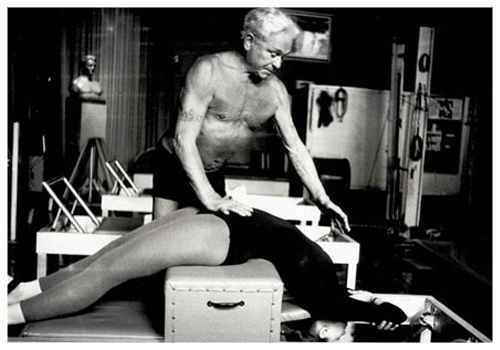 Joseph Pilates was born in Dusseldorf, Germany in 1880 to a gymnast father and a mother with a great interest in naturopathy.

In his youth he suffered from many ailments, and in order to help overcome these problems he studied a variety of physical disciplines such as anatomy, yoga and martial arts, bodybuilding, boxing, gymnastics and other sports.

All of these pursuits led to him developing a technique which he called ‘The Art of Contrology’ and which he later used to form the basis of what we know as Pilates today.

During the First World War he worked with injured and bed-ridden young servicemen, by using bunk beds and their bed springs in order to carry out a series of exercises – all the time using these prototype machines to provide safe support so that these men could tone their muscles, regain their mobility and thus aid in their rehabilitation. These prototypes paved the way for the reformers and other machinery found in today’s modern Pilates studios.

Moving to New York In 1926, Joseph Pilates and his wife opened their Pilates studio. His method of physical and mental wellbeing attracted devotees such as George Balanchine (Artistic Director of the New York City Ballet), Martha Graham (the mother of modern dance), Jerome Robbins, Rudolf von Laban (founder of Labanotation) and many others. Joseph Pilates worked with them, developing his body conditioning technique which evolved into the more familiar Pilates method that we know today.

He continued teaching at his studio until 1967, and during that time trained many instructors – all of whom travelled around the world, ensuring that his style of remedial and rehabilitative exercise would develop and gain in popularity for decades to come.

Dance companies use Joseph Pilates’ technique as an important part of their dancers’ training. Pilates has also become generally accepted by physiotherapists and other health professionals as a respected physical and remedial exercise tool.